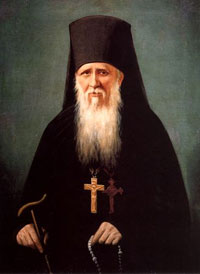 Aleksandr was born in the family of sexton Mikhail Fyodorovich Grenkov and Marfa Nikolayevna Grenkova. At the age of 12 Aleksandr entered the Tambov clerical school and later the Tambov theological seminary. Then he became a teacher in the Lipetsk clerical school and in 1839 entered the Vvedensk Monastery of the Optina Monastery in Kaluga guberniya. A few years later, he was ordained a hierodeacon, taking the name Ambrose in honor of Saint Ambrose of Milan. Two years later Ambrose became a celibate monk. When Reverend Macarius died in September of 1860, Ambrose became a superior of the monastery.

Ambrose died in the Shamordinskaya cloister and was buried in the Optina desert. His relics were placed in the Vvedensk Monastery.