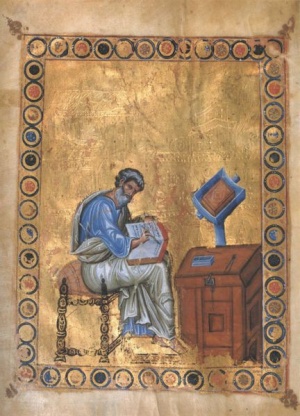 Matthew was originally called Levi. He was the son of Alphaeus and was by profession a publican, or tax-collector, at Capernaum. On one occasion Jesus, coming up from the side of the lake, passed the custom-house where Matthew was seated and said to him, "Follow me." Matthew arose and followed Christ, becoming his disciple (Matthew 9:9). He changed his name to reflect his new calling. "Matthew" means "Gift of the Lord."

The same day on which Jesus called him he made a "great feast" (Luke 5:29), a farewell feast, to which he invited Jesus and his disciples and probably also many of his old associates. The last notice of him in the New Testament is in Acts 1:13.

After the resurrection of our Lord, Matthew went and preached amongst the Jews. His Gospel was probably first written in Aramaic and later translated into Greek. Eventually Matthew went to Ethiopia to spread the gospel. There he was martyred by Fulvian, the ruler of the region, by being set on fire. After Matthew willingly gave up his soul to the Lord, his body was put in a coffin and cast into the sea. It washed up at the site of the church he had built. Fulvian, Matthew's persecutor, immediately repented of his deed, renounced his position of worldly power, and was made a presbyter by the Bishop Platon (or Plato). Once Platon died, the apostle appeared to the priest (who had taken the name Matthew as well) and told him to assume the bishop's throne.

With zeal, you followed Christ the Master,
who in His goodness, appeared on earth to mankind.
Summoning you from the custom house,
He revealed you as a chosen apostle:
the proclaimer of the Gospel to the whole world!
Therefore, divinely eloquent Matthew,
we honor your precious memory!
Entreat merciful God that He may grant our souls remission of transgressions.

Casting aside the bonds of the custom house for the yoke of justice,
you were revealed as an excellent merchant, rich in wisdom from on high.
You proclaimed the word of truth
and roused the souls of the slothful
by writing of the hour of Judgment.